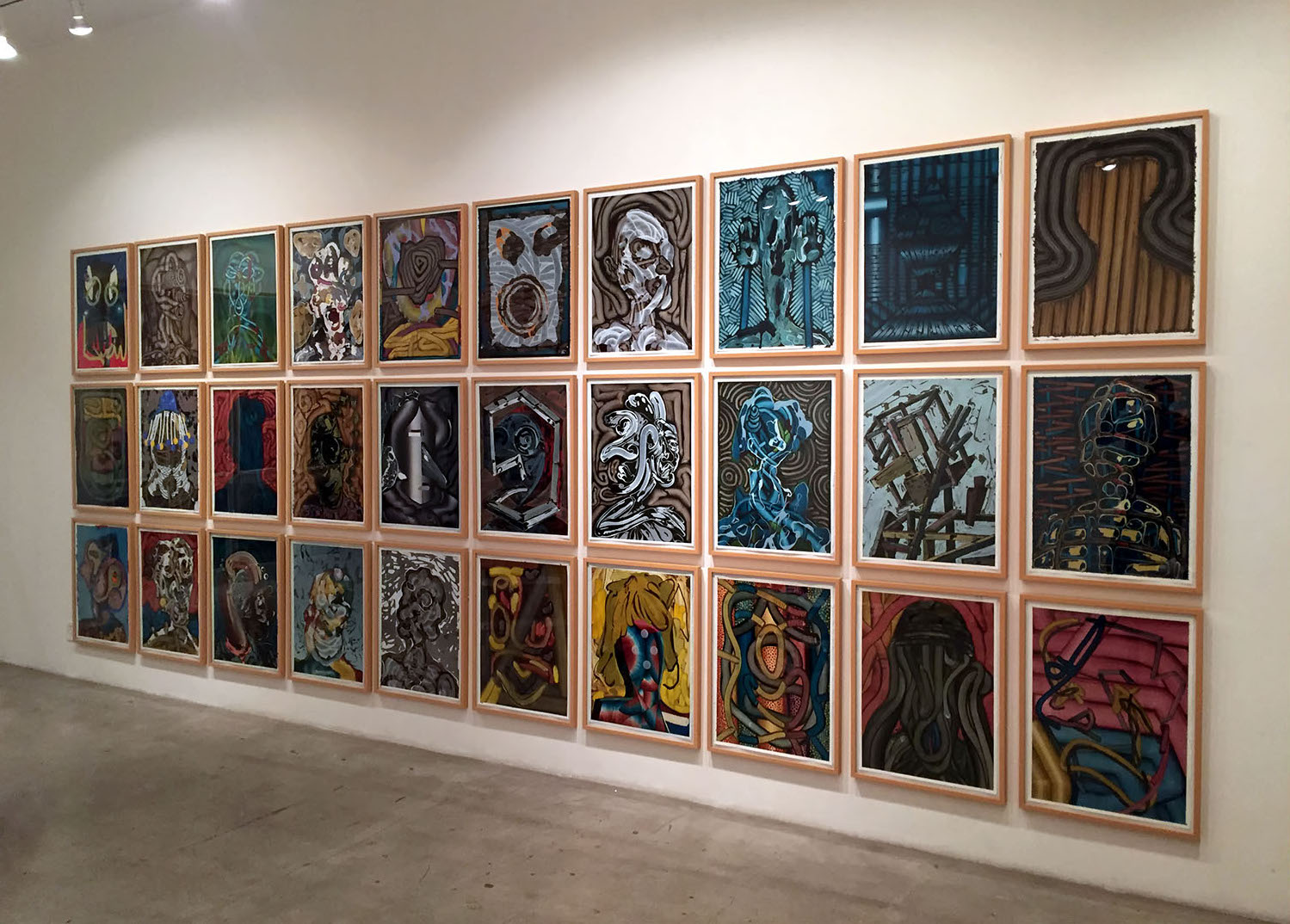 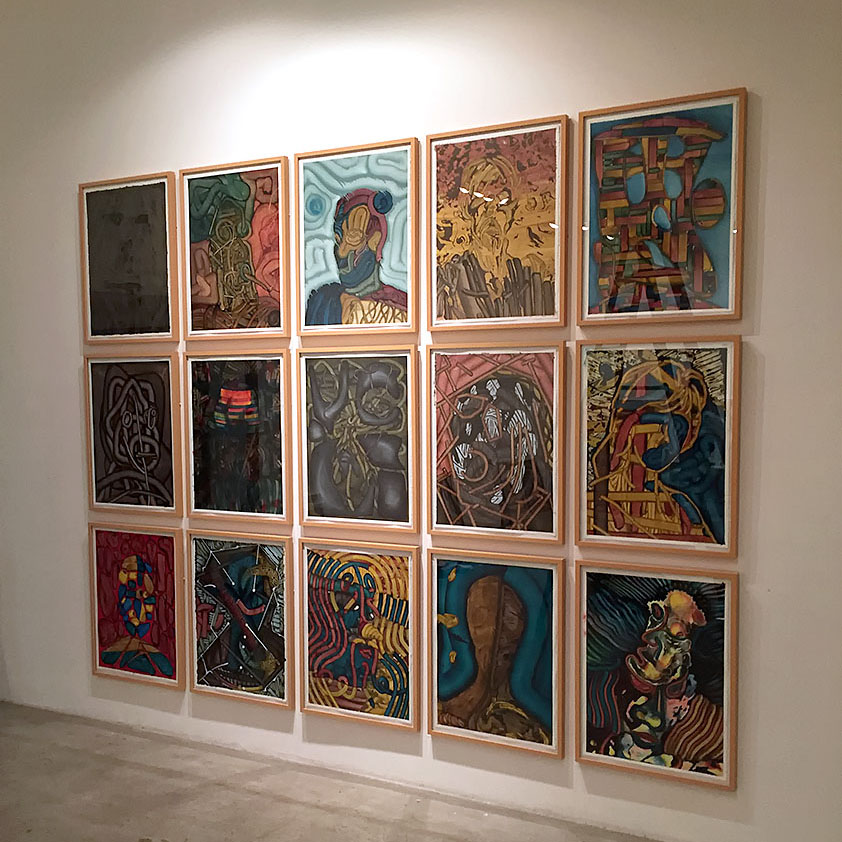 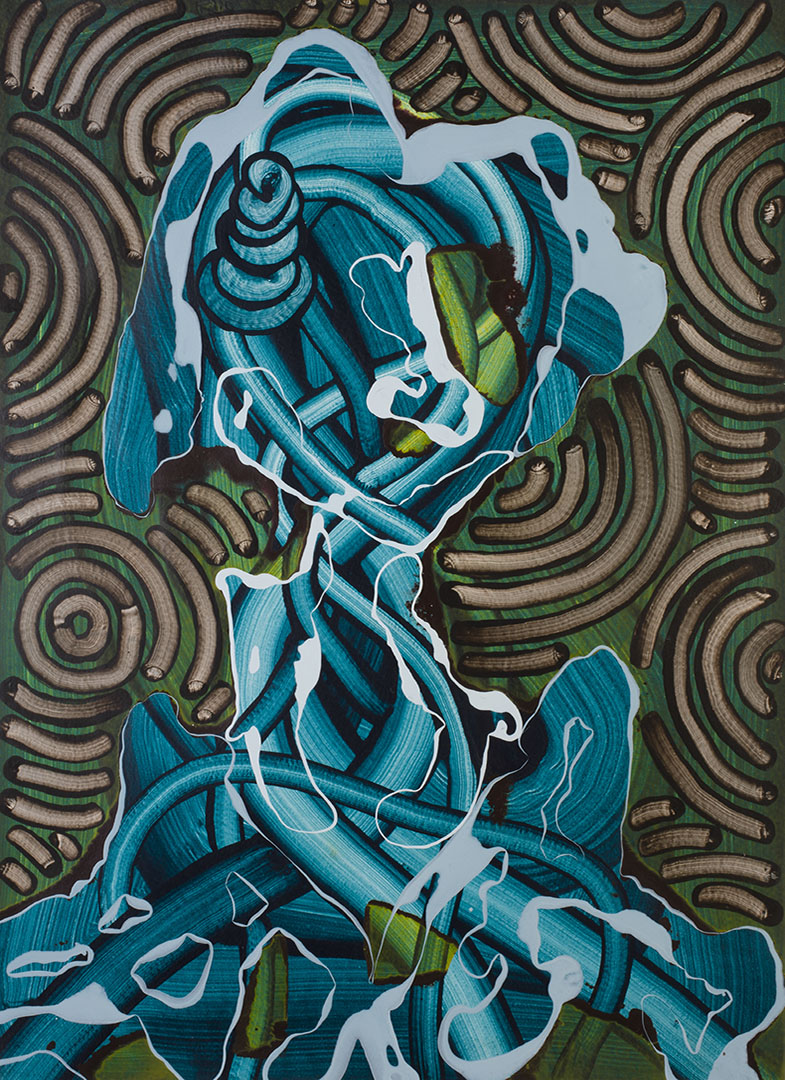 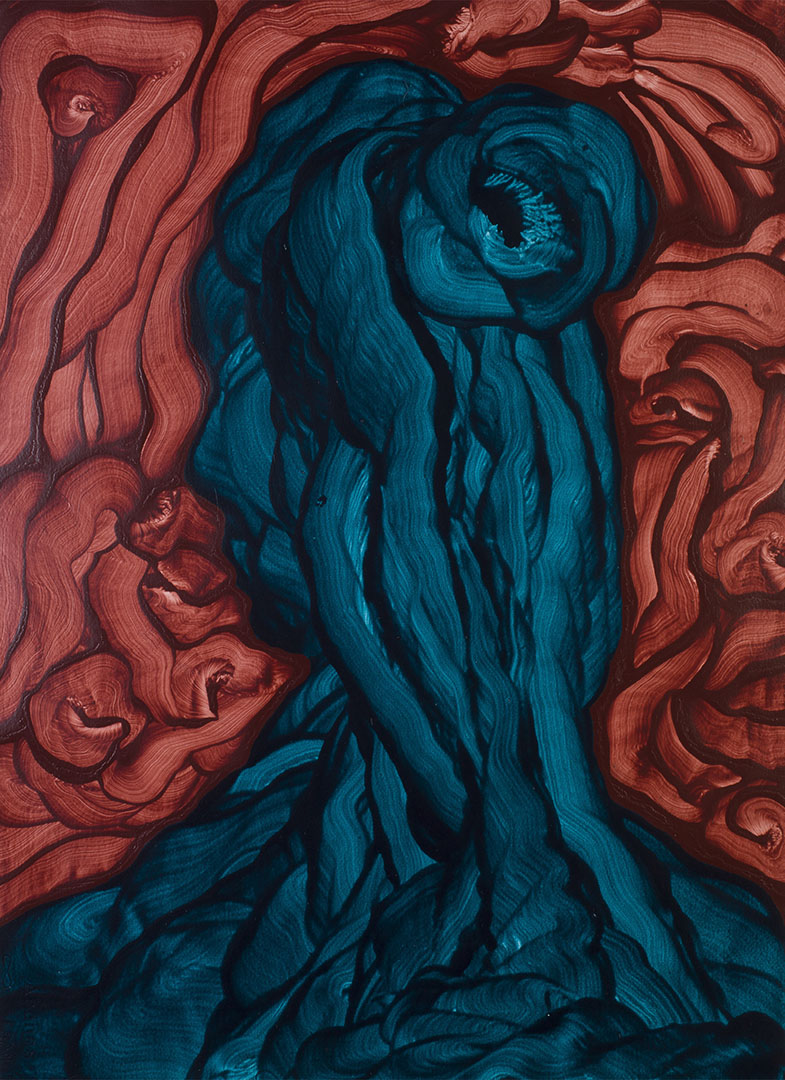 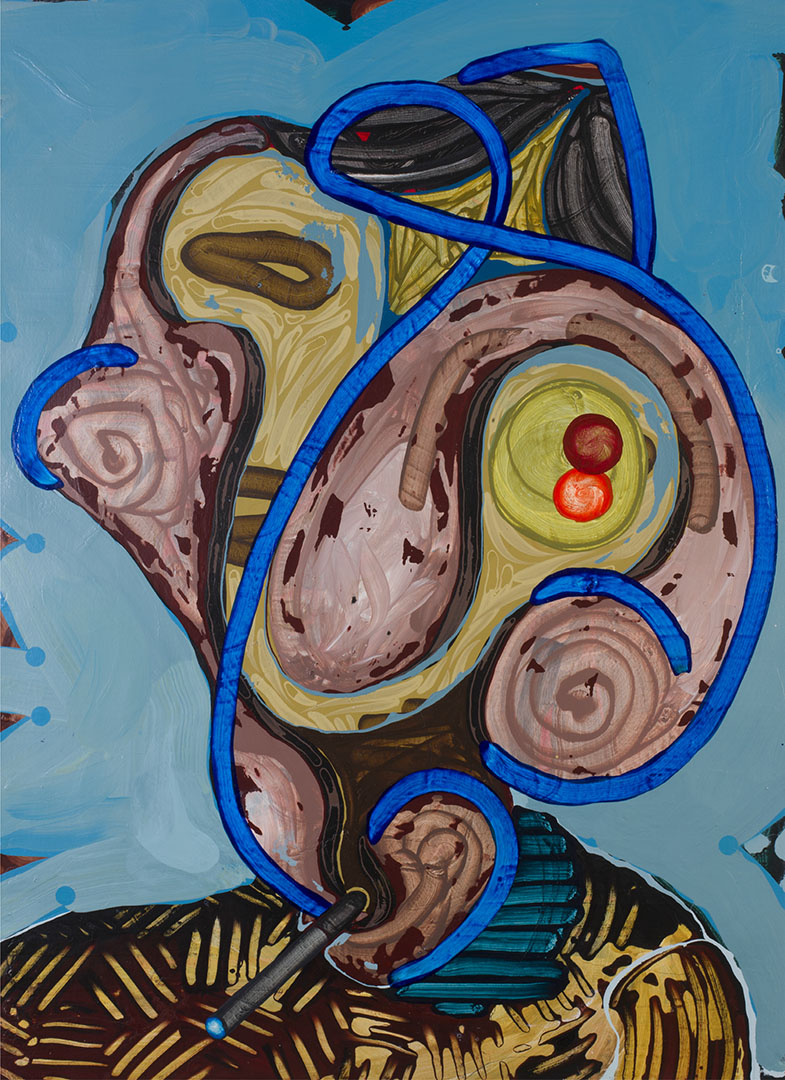 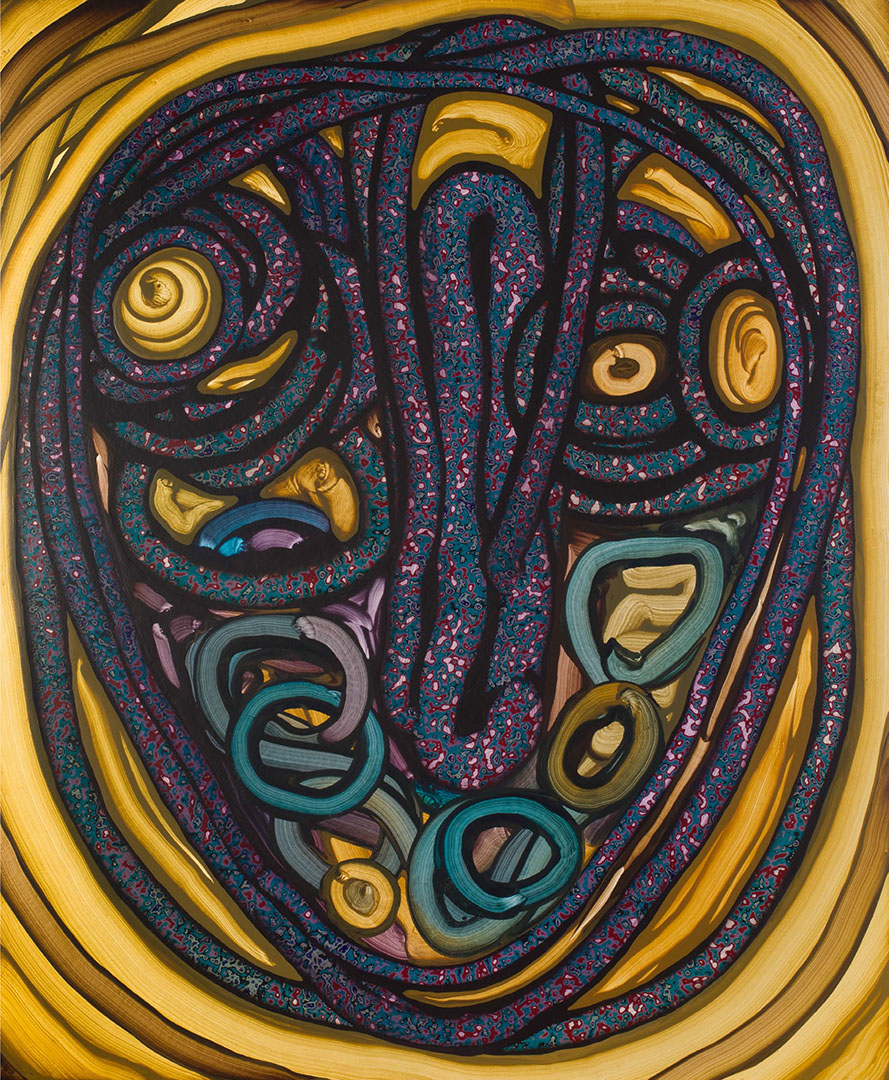 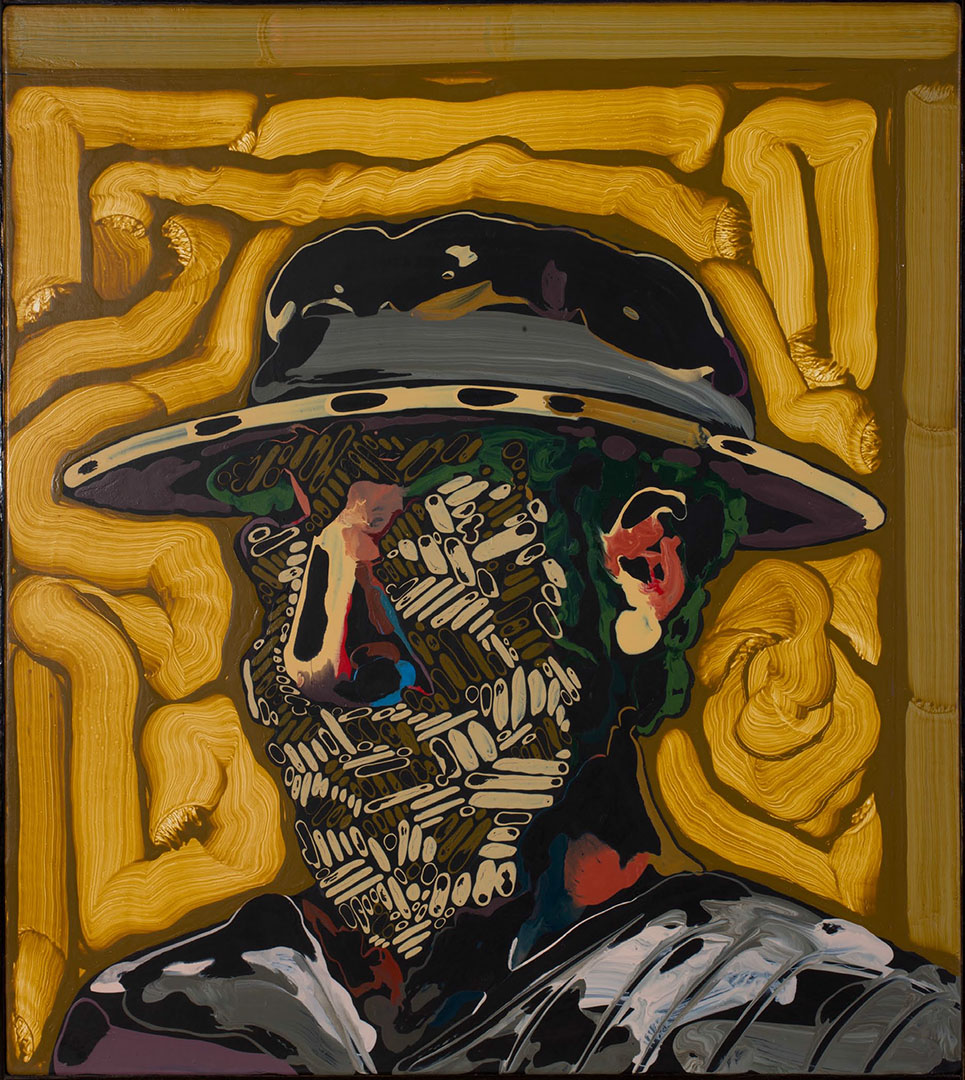 JAUS is now open every Saturday from noon to 4pm. Otherwise by appointment.

It is with great enthusiasm that JAUS presents the sixth solo exhibition by Nathan Redwood in California, curated by Carl Berg. For this presentation, Redwood amasses the largest grouping of his works to date: an expansive grid of individually framed works on paper seemingly exploits every possible idiosyncrasy of his oeuvre to conjure an impression of portraits. The reductive potential of his process capitalizes on the psychological tendency to perceive patterns of the familiar, especially the face as a locus of emotion. From one head to the next throughout the grid, each painting suggests a stylistic change or departure from the previous. The overall work suggests diversity as style itself.

Many of the portraits reflect the artist’s recent experimentation with “removals” – his technique of removing partially dry wet paint from the surface – to propel chance or accidents and promote the appearance of new forms. The resulting effect leaves a surface residue like a hole or opening that expands the vocabulary of his process. A grouping of paintings on canvas will also accompany the show.

Redwood’s debut solo exhibition at Carl Berg Gallery in Los Angeles (2007) bore witness to the emergence of a unique painting language. The artist’s large canvases feature organic brooding gestures that portend an impromptu happening or critical event. His signature process consists of a matrix of volumetric brushstrokes in a transparent palette, suggesting a road map which enables the viewer to follow the painting’s construction. The patterning of these brushstrokes builds hallucinatory atmospheres with surrogate figuration typically in the foreground. His work riffs on major genres of painting: portraiture, still life and landscape. Often foregrounding a turbulent arabesque or literal stick figure tableau within a surreal landscape, architecture, or interior, the paintings simultaneously parody abstract formalism, color field and action painting.

Following are a selection of excerpts from reviews about Nathan Redwood's work:

“Redwood builds his images on a foundation of myth and history, scattering references to gods and artists alike. With rollicking physical humor, he connects his disparate parts in the manner of Rube Goldberg contraptions or stream-of-consciousness rebuses.” ~ Leah Ollman, LA Times

madness expressed at the way painting's magic exerts a disobedient life of its own. Redwood seems to be happily wrestling, dancing and arguing with his practice. Amid the chaos and playful wreckage, the exuberance is disarming.” ~ Christopher Knight, LA Times

“Redwood's nutty, scary canvases are puns on action painting, as he uses the unsteady, liquid nature of paint itself to shatter the two-dimensional picture plane.” ~ Michael Duncan, Art in America

“The idea that the damage has been done and we're living in its aftermath take queasy shape in Nathan Redwood's hallucinatory landscape paintings...” ~ David Pagel, LA Times

BIOGRAPHY
Born in Phoenix, AZ, Redwood received a BFA from the School of the Art Institute of Chicago, followed by his residency at the Skowhegan School of Painting and Sculpture in 2005. He has lived in Phoenix, Chicago, Los Angeles, Rotterdam and most recently, New York City. Among others, Redwood has exhibited at the Neuberger Museum of Art, New York, the Torrance Art Museum, California, and TENT Centrum Beeldende Kunst, Rotterdam. His paintings are in the permanent collections of the San Jose Museum of Art, California, Cornell Fine Arts Museum, Florida, and in many private art collections. His solo exhibition at Michael Kohn in 2010 was featured in the Los Angeles Times, Artillery Magazine, and ArtScene.

The artist would like to extend a special thanks to Mary Yeager and John Lithgow for their generous support and contributions that helped make this show a reality, and additional thanks to Arizona Microgreens, Linda Martinez and Peg Schanne for their continued support.