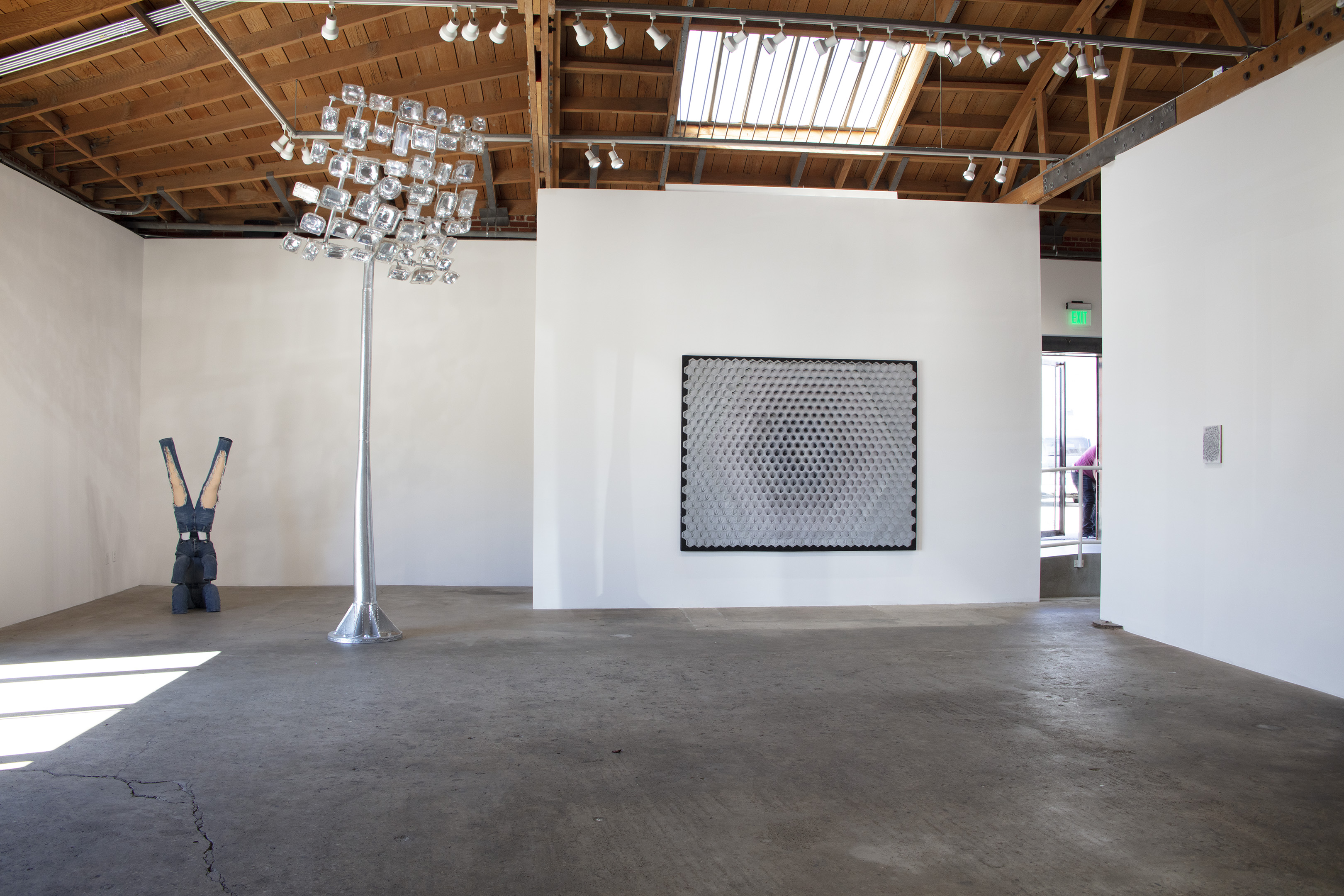 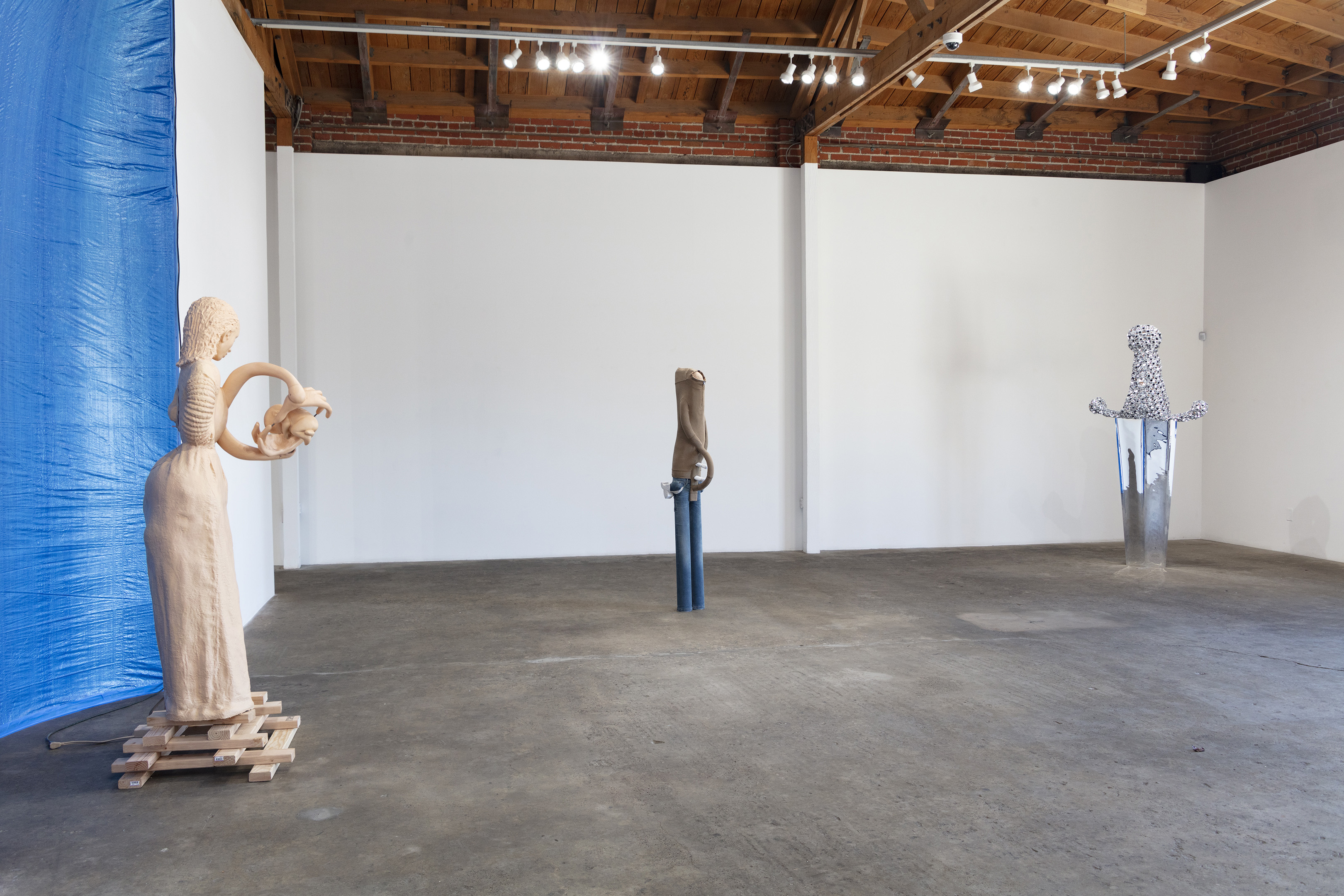 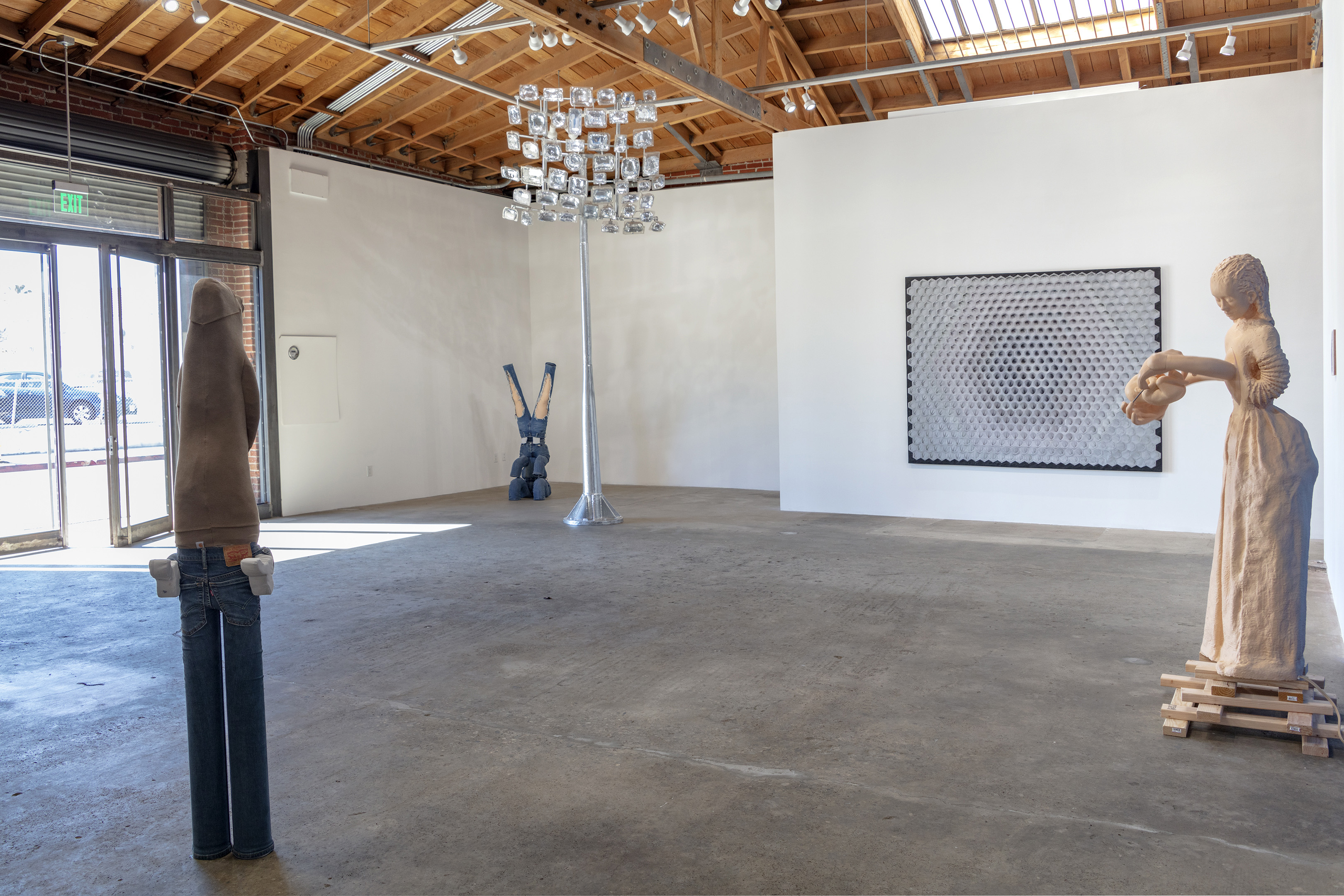 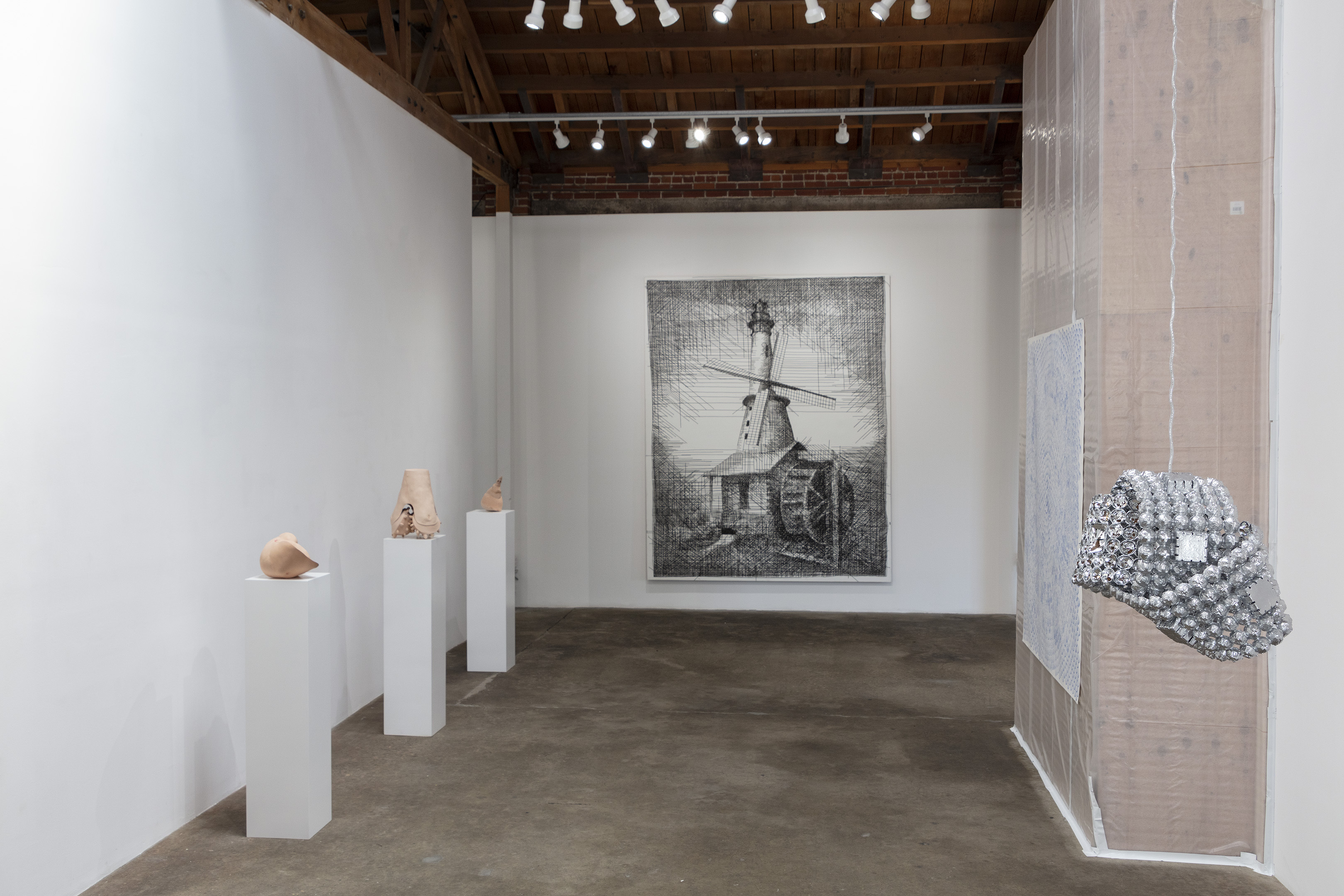 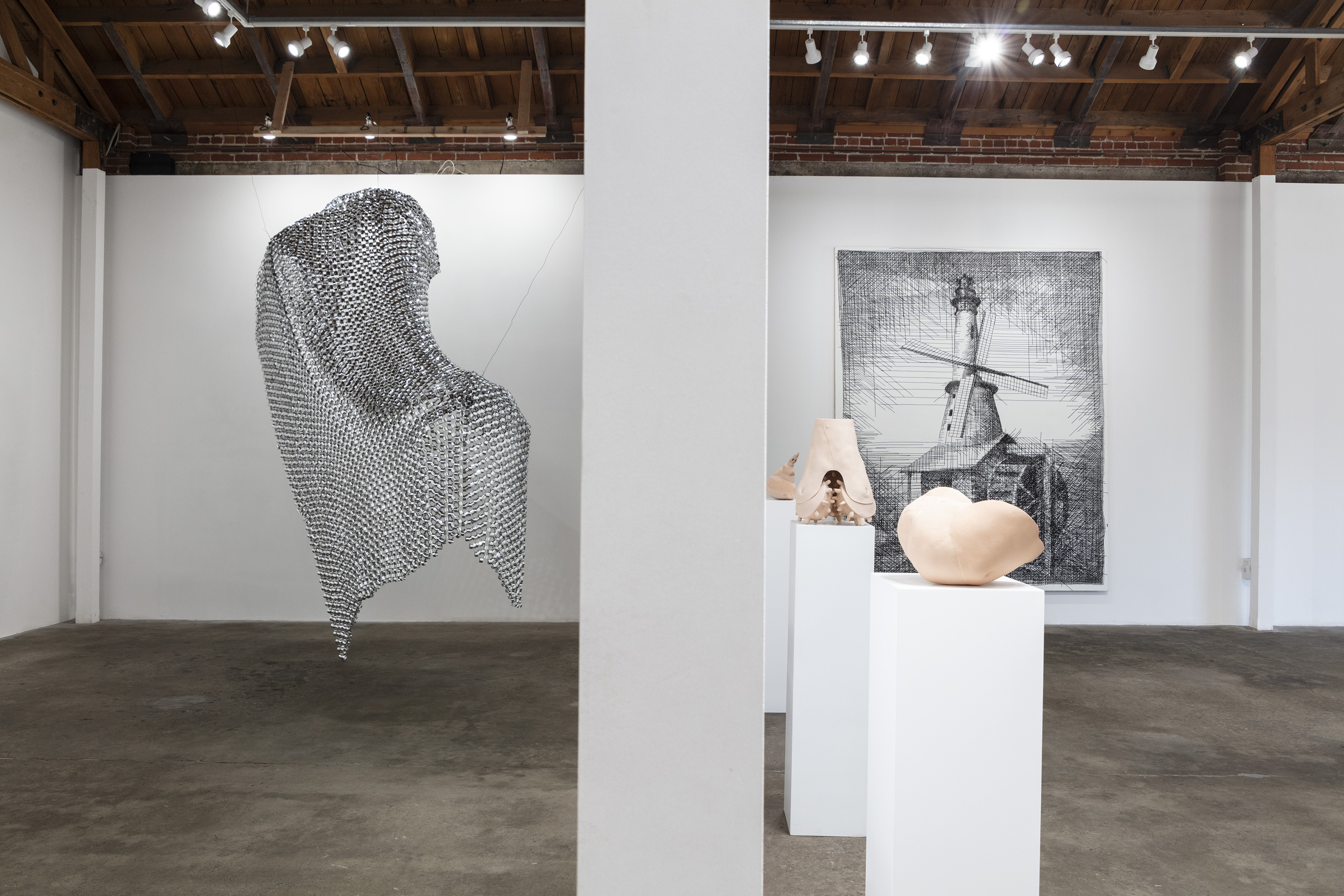 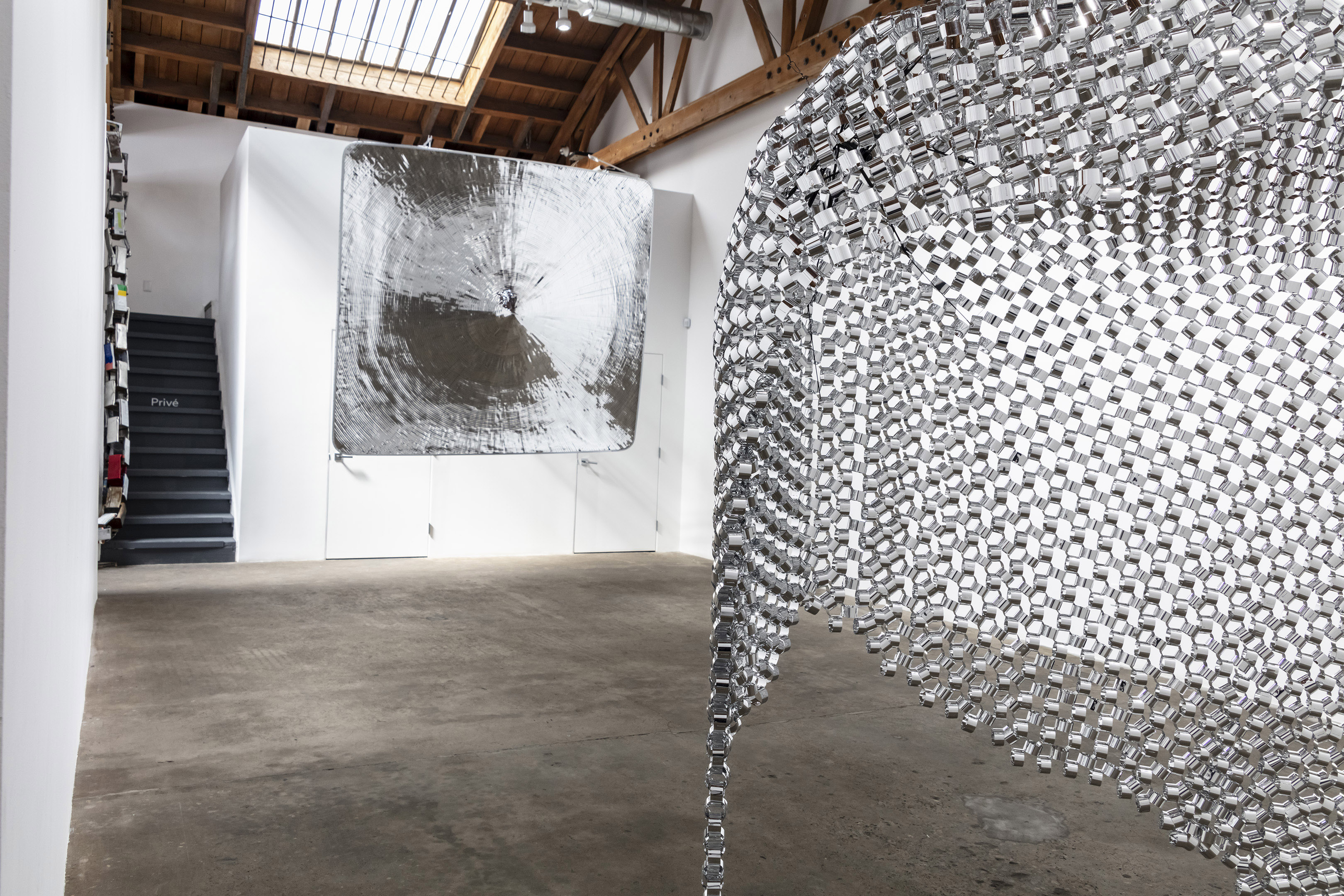 Los Angeles, CA - DENK gallery is pleased to present NEW WORKS, the gallery's first one-person exhibition of Los Angeles-based multidisciplinary artist Tim Hawkinson. In his first solo show in Los Angeles in almost a decade Hawkinson's studio-centric sculptural practice continues to reveal an obsessive preoccupation with constitutive parts and an affinity for their inventive, if at times perverse and transgressive. Fascinated by the inner workings of systems and the transformative potential of process and hand-making, Hawkinson creates alternative anatomies, productive machines, dimensional distortions, and bizarre automata - with all manner of found and synthesized materials - often mechanizing these conceptual propositions as kinetic, sound emitting installations, or invisible production tools used in the creation of work.

Shared across Hawkinson's often self-referential or even solipsistic output, is an exploratory impulse and a desire to push against the empiric limitations of the human and analog. His experimental mimicry accomplishes what even the digital could not in recent memory, tapping into its desire for simultaneity and material omniscience. Hawkinson has produced dimensional self-portraits that seem to anticipate the morphological distortions possible only with digital technologies like   3-D printing, but using the simplest and most rudimentary of means, like incrementally shot photographs painstakingly reassembled through collage.

Hawkinson often uses his own body as a model and unit of measure, casting it from the largest to smallest surface area in a personal taxonomy of sorts, prone to constant distortion and grotesque revision each time it's mined and abstracted for new sculptural components. In an ongoing series, the body is reimagined endlessly as an aberrant and protean topography of extruding flesh, ill contained by the generic ubiquity of denim. A performative dimension informs much of the work as well, as Hawkinson subjects himself to physical and time-based constraints in production, ranging in intrusiveness from vulnerable self-exposition to true sensory deprivation, as in when casting the most bizarre recesses of the body like the uvula in the back of his throat.

Transforming familiar materials and objects into extraordinary new forms through improbable methods, Hawkinson, in past works, has cast himself and his entire bathroom in latex, inflating them like giant, abject balloon skins; has used his own fingernail clippings to create a skeletal ornithological specimen; has created an enormous intestinally amorphous looking kinetic sculpture that reads musical notation and emits sound; has invented a two-dimensional mechanization of his own face to puppet affect, and has reimagined castaway Christmas trees as slightly phobic, abstract vertebrates. With overwhelming feats of mechanical and inventive will, Hawkinson exerts a kind of material genius over the lowliest and most unassuming of materials. His virtuosity, however, is founded in a disarming humility, even self-effacement, adding a layer of pathos to a technically ambitious practice.

New Works will include a new series of sculptural works, and large-format drawings on paper, that continue to explore Hawkinson's playful and morbid morphologies. The artist disassembles the familiar and stages absurdist, dysfunctional propositions in which the self repeatedly appears as the only, albeit imperfect, measure of experience. Hawkinson's inventive return to obsessive craft in service of concept exists in an expanded and embodied field, dramatized by the inclusion of living variables like time, breath (sound), and movement.

In 2005, the artist was the subject of mid-career retrospectives at the Whitney and LACMA.